What is DTPA Used For?

A brief introduction of DTPA Storage: The commercial powder can be stored at room temperature. The stock solution has to be stored at -20 °C.

Solubility: It is soluble in water (4,8 g/l at 25 °C), but not readily soluble in ethanol or apolar solvents.

2. This product is a chelating titrant. As a complexing agent drug, it is used for the treatment of radioisotope and heavy metal poisoning. 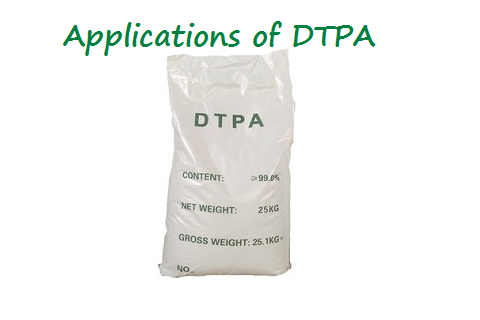 Like common EDTA, DTPA is mainly used to isolate metal ions, which would otherwise decompose hydrogen peroxide, which is used to bleach pulp in papermaking.

Its chelating properties can be used to deactivate calcium and magnesium ions in hair care products. DTPA has been used in more than 150 cosmetics. In addition, DTPA is used for MRI contrast agents. DTPA improves MRI images by forming complexes with with ions, thereby changing the properties of nearby water molecules.

DTPA has been considered to be used to treat radioactive materials, such as p, a and other act elements. In theory, these complexes are easier to eliminate in urine. It is usually applied in the form of calcium or zinc salts because these ions are easily replaced by more charged cations. DTPA forms complexes with th(IV), uranium (IV), n(IV) and cerium (III/IV).

Zinc-DTPA and calcium-DTPA are safe and effective for people whose breath is contaminated. The recommended treatment method is to treat the initial dose of DTPA calcium, because this DTPA salt shows a more effective effect within the first 24 hours after it is internally contaminated with p, meric or cur. After this period of time, both calcium-DTPA and zinc-DTPA are equally effective in reducing internal pollution, and zinc-DTPA is unlikely to consume normal levels of zinc and other metals vital to health. People who breathe pollution can administer each drug through a nebulizer, and people who have other routes can use intravenous injection.

DTPA is also used as a chelating agent for aquatic plant fertilizers (especially iron), which is an essential micronutrient that all plants usually need in large amounts. Chelates are dissolved organic substances that can bind to metals and prevent them from oxidizing to form larger molecules. When used to fertilize aquatic plants, FeDTPA is usually sold under the name chelated iron 10% or 11%. The iron normally found in the water column of the aquarium has been converted to ferric iron (Fe3 +) due to the presence of dissolved oxygen. However, the factory needs ferrous iron (Fe2 +), so additional energy must be spent to extract ferric iron from the water tower and convert it into ferrous form. When used to chelate iron fertilizers, DTPA can ensure that iron remains in the ferrous state (Fe2 +) over time, so it can be used by aquatic plants without consuming precious energy.

DTPA can be injected directly into a vein in the arm, or it can be instilled into a vein from a bag (intravenous injection). Inhaling DTPA may cause coughing or wheezing in some people, especially people with asthma. The safety and effectiveness of inhaled DTPA has not been shown in children. According to the doctor's decision, DTPA should be taken only when needed.

People who repeatedly take Ca-DTPA within a short period of time may experience nausea, vomiting, diarrhea, chills, fever, itching, and muscle bruises. Other side effects may include headache, dizziness, chest pain and metallic taste in the mouth. Ca-DTPA should be used with caution in patients with blood diseases.