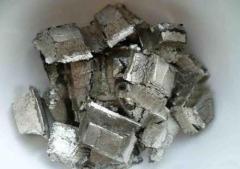 Ytterbium is a chemical element with symbol Yb and atomic number 70. It is the fourteenth and penultimate element in the lanthanide series, or last element in the f-block, which is the basis of the relative stability of the +2 oxidation state. However, like the other lanthanides, the most common oxidation state is +3, seen in its oxide, halides and other compounds. In aqueous solution, like compounds of other late lanthanides, soluble ytterbium compounds form complexes with nine water molecules. Because of its closed-shell electron configuration, its density and melting and boiling points differ from those of the other lanthanides.

The 169Yb isotope (with a half-life of 32 days), which is created along with the short-lived 175Yb isotope (half-life 4.2 days) by neutron activation during the irradiation of ytterbium in nuclear reactors, has been used as a radiation source in portable X-ray machines. Like X-rays, the gamma rays emitted by the source pass through soft tissues of the body, but are blocked by bones and other dense materials. Thus, small 169Yb samples (which emit gamma rays) act like tiny X-ray machines useful for radiography of small objects. Experiments show that radiographs taken with a 169Yb source are roughly equivalent to those taken with X-rays having energies between 250 and 350 keV. 169Yb is also used in nuclear medicine.

Ytterbium clocks hold the record for stability with ticks stable to within less than two parts in 1 quintillion (2×10−18).The clocks developed at the National Institute of Standards and Technology (NIST) rely on about 10,000 rare-earth atoms cooled to 10 microkelvin (10 millionths of a degree above absolute zero) and trapped in an optical lattice—a series of pancake-shaped wells made of laser light. Another laser that "ticks" 518 trillion times per second provokes a transition between two energy levels in the atoms. The large number of atoms is key to the clocks' high stability.

Ytterbium can also be used as a dopant to help improve the grain refinement, strength, and other mechanical properties of stainless steel. Some ytterbium alloys have rarely been used indentistry.