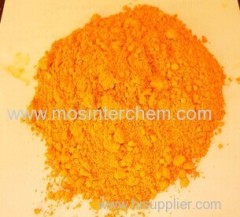 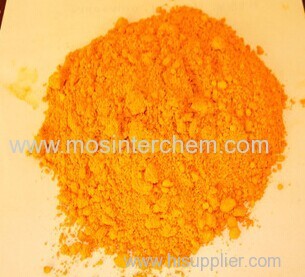 Riboflavin, also known as vitamin B2 and is the vitamin formerly known as G, is an easily absorbed colored micronutrient with a key role in maintaining health in humans and other animals. It is the central component of the cofactors FAD and FMN, and is therefore required by all flavoproteins. As such, vitamin B2 is required for a wide variety of cellular processes. It plays a key role in energy metabolism, and for the metabolism of fats,ketone bodies, carbohydrates, and proteins.

The name "riboflavin" comes from "ribose" (the sugar whose reduced form, ribitol, forms part of its structure) and "flavin", the ring-moiety which imparts the yellow color to the oxidized molecule . The reduced form, which occurs in metabolism along with the oxidized form, is colorless.

Riboflavin can be used as a deliberate orange-red food color additive, and as such is designated in Europe as the E number E101.

Riboflavin has been used in several clinical and therapeutic situations. For over 30 years, riboflavin supplements have been used as part of the phototherapy treatment of neonatal jaundice. The light used to irradiate the infants breaks down not only bilirubin, the toxin causing the jaundice, but also the naturally occurring riboflavin within the infant's blood, so extra supplementation is necessary.

One clinical trial found that high dose riboflavin appears to be useful alone or along with beta-blockers in the prevention of migraine. A dose of 400 mg daily has been used effectively in the prophylaxis of migraines, especially in combination with a daily supplement of magnesium citrate 500 mg and, in some cases, a supplement of coenzyme Q10. However, two other clinical studies have failed to find any significant results for the effectiveness of B2 as a treatment for migraine.

Riboflavin in combination with UV light has been shown to be effective in reducing the ability of harmful pathogens found in blood products to cause disease. When UV light is applied to blood products containing riboflavin, the nucleic acids in pathogens are damaged, rendering them unable to replicate and cause disease. Riboflavin and UV light treatment has been shown to be effective for inactivating pathogens in platelets and plasma, and is under development for application to whole blood. Because platelets and red blood cells do not contain a nucleus (i.e. they have no DNA to be damaged) the technique is well-suited for destroying nucleic acid containing pathogens (including viruses, bacteria, parasites, and white blood cells) in blood products.

Recently, riboflavin has been used in a new treatment to slow or stop the progression of the corneal disorder keratoconus. This is called corneal collagen crosslinking (CXL). In corneal crosslinking, riboflavin drops are applied to the patient's corneal surface. Once the riboflavin has penetrated through the cornea, ultraviolet A light therapy is applied. This induces collagen crosslinking, which increases the tensile strength of the cornea. The treatment has been shown in several studies to stabilize keratoconus.

A solution of riboflavin in water (right) is yellow with slight green fluorescence under fluorescent room lighting. The beaker prepared at left holds a detergent in water, forming micelles that will show the passage of a visible laser beam.

A 473 nm 200 mW blue laser beam is directed into the two beakers from the left. The detergent shows the path of the beam by blue scattered light. The light from the riboflavin solution is intense green fluorescence showing along the path of this laser beam.

Because riboflavin is fluorescent under UV light, dilute solutions (0.015-0.025% w/w) are often used to detect leaks or to demonstrate coverage in an industrial system such a chemical blend tank or bioreactor. (See the ASME BPE section on Testing and Inspection for additional details.)