Sunitinib (marketed as Sutent by Pfizer, and previously known as SU11248) is an oral, small-molecule, multi-targeted receptor tyrosine kinase(RTK) inhibitor that was approved by the FDA for the treatment of renal cell carcinoma (RCC) and imatinib-resistant gastrointestinal stromal tumor(GIST) on January 26, 2006. Sunitinib was the first cancer drug simultaneously approved for two different indications.

These include all receptors for platelet-derived growth factor (PDGF-Rs) and vascular endothelial growth factor receptors (VEGFRs), which play a role in both tumor angiogenesis and tumor cell proliferation. The simultaneous inhibition of these targets therefore leads to both reduced tumor vascularization and cancer cell death, and ultimately tumor shrinkage.

Sunitinib also inhibits KIT (CD117), the RTK that (when improperly activated by mutation) drives the majority of gastrointestinal stromal cell tumors. It has been recommended as a second-line therapy for patients whose tumors develop mutations in KIT that make them resistant to imatinib, or who become intolerant to the drug.

In addition, sunitinib inhibits other RTKs. These include the following:

The fact that sunitinib targets many different receptors, leads to many of its side effects such as the classic hand-foot syndrome, stomatitis, and other dermatologic toxicities.

Like RCC, GIST does not generally respond to standard chemotherapy or radiation. Imatinib was the first cancer agent proven effective for metastatic GIST and represented a major development in the treatment of this rare but challenging disease. However, approximately 20% of patients do not respond to imatinib (early or primary resistance), and among those who do respond initially, 50% develop secondary imatinib resistance and disease progression within two years. Prior to sunitinib, patients had no therapeutic option once they became resistant to imatinib.

Sunitinib offers patients with imatinib-resistant GIST a new treatment option to stop further disease progression and, in some cases, even reverse it. This was shown in a large, Phase III clinical trial in which patients who failed imatinib therapy (due to primary resistance, secondary resistance, or intolerance) were treated in a randomized and blinded fashion with either sunitinib or placebo.

The study was unblinded early, at the very first interim analysis, due to the clearly emerging benefit of sunitinib. At that time, patients receiving placebo were offered to switch over to sunitinib. In the primary endpoint of this study, median time to tumor progression (TTP) was more than four-fold longer with sunitinib (27 weeks) compared with placebo (six weeks, P<.0001). These are based on the assessments of an independent radiology lab assessment. The benefit of sunitinib remained statistically significant when stratified for a multitude of prespecified baseline factors.

Among the secondary endpoints, the difference in progression-free survival (PFS) was similar to that in TTP (24 weeks vs six weeks, P<.0001). Seven percent of sunitinib patients had significant tumor shrinkage (objective response) compared with 0% of placebo patients (P=.006). Another 58% of sunitinib patients had disease stabilization vs. 48% of patients receiving placebo. The median time to response with sunitinib was 10.4 weeks. Sunitinib reduced the relative risk of disease progression or death by 67%, and the risk of death alone by 51%. The difference in survival benefit may be diluted because placebo patients crossed over to sunitinib upon disease progression, and most of these patients subsequently responded to sunitinib.

Fatigue is the adverse event most commonly associated with sunitinib therapy. In this study, 34% of sunitinib patients reported any grade of fatigue, compared with 22% for placebo. The incidence of grade 3 (severe) fatigue was similar between the two groups, and no grade 4 fatigue was reported.

Sunitinib is being studied for treatment of meningioma which is associated with neurofibromatosis.

In November 2010, Sutent gained approval from the European Commission for the treatment of 'unresectable or metastatic, well-differentiated pancreatic neuroendocrine tumors with disease progression in adults'. In May 2011, the USFDA approved Sunitininb for treating patients with 'progressive neuroendocrine cancerous tumors located in the pancreas that cannot be removed by surgery or that have spread to other parts of the body (metastatic)'.

RCC is generally resistant to chemotherapy or radiation. Prior to RTKs, metastatic disease could only be treated with the cytokines interferon alpha (IFNα) or interleukin-2. However, these agents demonstrated low rates of efficacy (5%-20%).

In a phase 3 study, median progression-free survival was significantly longer in the sunitinib group (11 months) than in the IFNα group (five months), a hazard ratio of 0.42. In the secondary endpoints, 28% had significant tumor shrinkage with sunitinib compared to 5% with IFNα. Patients receiving sunitinib had a better quality of life than IFNα.

Sunitinib treatment trended towards a slightly longer overall survival, although this was not statistically significant.

The efficacy of sunitinib is currently being evaluated in a broad range of solid tumors, including breast, lung, thyroid and colorectal cancers. Early studies have shown single-agent efficacy in a number of different areas. Sunitinib blocks the tyrosine kinase activities of KIT, PDGFR, VEGFR2 and other tyrosine kinases involved in the development of tumours.

Sunitinib was used to treat the leukemia of a Washington University in St. Louis leukemia researcher who developed the disease himself. His team used genetic sequencing and noticed that the FLT3 gene was hyperactive in his leukemia cells and used sunitinib as a treatment. 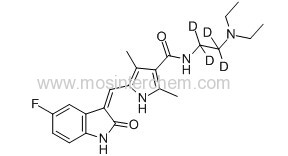 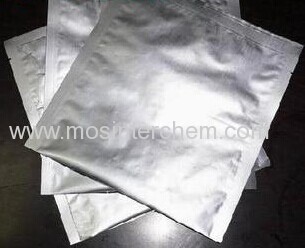 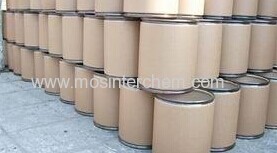