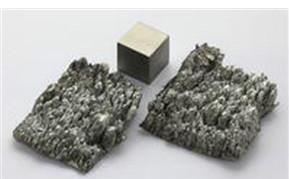 Scandium is a chemical element with symbol Sc and atomic number 21. A silvery-white metallic d-block element, it has historically been sometimes classified as a rare earth element, together with yttrium and the lanthanoids. It was discovered in 1879 by spectral analysis of the minerals euxeniteand gadolinite from Scandinavia.

Because of the low availability and the difficulties in the preparation of metallic scandium, which was first done in 1937, it took until the 1970s before applications for scandium were developed. The positive effects of scandium on aluminium alloys were discovered in the 1970s, and its use in such alloys remains its only major application. The global trade of the pure metal is around a hundred pounds per year on average.

The properties of scandium compounds are intermediate between those of aluminium and yttrium. A diagonal relationship exists between the behavior ofmagnesium and scandium, just as there is between beryllium and aluminium. In the chemical compounds of the elements shown as group 3, above, the predominant oxidation state is +3.

Parts of the MiG-29 are made from Al-Sc alloy.

The addition of scandium to aluminium limits the excessive grain growth that occurs in the heat-affected zone of welded aluminium components. This has two beneficial effects: the precipitated Al3Sc forms smaller crystals than are formed in other aluminium alloys and the volume of precipitate-free zones that normally exist at the grain boundaries of age-hardening aluminium alloys is reduced. Both of these effects increase the usefulness of the alloy.[why?]However, titanium alloys, which are similar in lightness and strength, are cheaper and much more widely used

The main application of scandium by weight is in aluminium-scandium alloys for minor aerospace industry components. These alloys contain between 0.1% and 0.5% of scandium. They were used in the Russian military aircraft, specifically the MiG-21 and MiG-29.

Some items of sports equipment, which rely on high performance materials, have been made with scandium-aluminium alloys, including baseball bats, andbicycle frames and components. Lacrosse sticks are also made with scandium. The American firearm manufacturing company Smith & Wesson produces revolvers with frames composed of scandium alloy and cylinders of titanium or carbon steel.

Approximately 20 kg (as Sc2O3) of scandium is used annually in the United States to make high-intensity discharge lamps. Scandium iodide, along with sodium iodide, when added to a modified form of mercury-vapor lamp, produces a form of metal halide lamp. This lamp is a white light source with high color rendering index that sufficiently resembles sunlight to allow good color-reproduction with TV cameras. About 80 kg of scandium is used in metal halide lamps/light bulbs globally per year. The first scandium-based metal halide lamps were patented by General Electric and initially made in North America, although they are now produced in all major industrialized countries. The radioactive isotope 46Sc is used in oil refineries as a tracing agent.Scandium triflate is a catalytic Lewis acid used in organic chemistry. 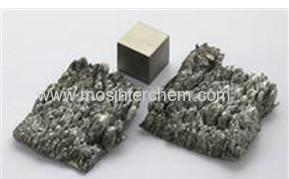