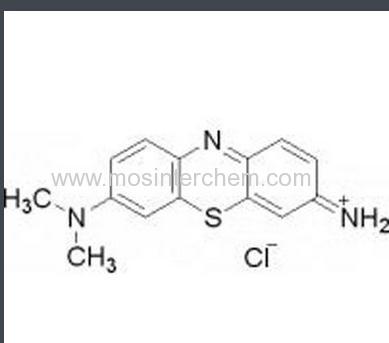 The description of the characters

Giemsa stain is a kind of blue-purple powder,Dissolved in equal amounts of methanol and glycerol,Solution is blue.Ii is a neutral dyes,flammable mixture solution.

Giemsa stain , named after Gustav Giemsa, an early German microbiologist, is used in cytogenetics and for the histopathological diagnosis of malaria and other parasites.

It is specific for the phosphate groups of DNA and attaches itself to regions of DNA where there are high amounts ofadenine-thymine bonding. Giemsa stain is used in Giemsa banding, commonly called G-banding, to stain chromosomes and often used to create an idiogram. It can identify chromosomal aberrations such as translocations and rearrangements.

Giemsa stain is also a differential stain, such as when it is combined with Wright stain to form Wright-Giemsa stain. It can be used to study the adherence of pathogenic bacteria to human cells. It differentially stains human and bacterial cells purple and pink respectively. It can be used for histopathological diagnosis of malaria and some other spirochete and protozoan blood parasites. It is also used in Wolbach's tissue stain.

Giemsa stains the fungus histoplasma, chlamydia bacteria, and can be used to identify Mast cells.

Giemsa's solution is a mixture of methylene blue, eosin, and Azure B. The stain is usually prepared from commercially available Giemsa powder.

A thin film of the specimen on a microscope slide is fixed in pure methanol for 30 seconds, by immersing it or by putting a few drops of methanol on the slide. The slide is immersed in a freshly prepared 5% Giemsa stain solution for 20–30 minutes (in emergencies 5–10 minutes in 10% solution can be used), then flushed with tap water and left to dry.